Episode 119 - Miss Snake Charmer, The Old Guard, Palm Springs, The One I Love, and A Rewatch of Harmony Korine's "Kids" 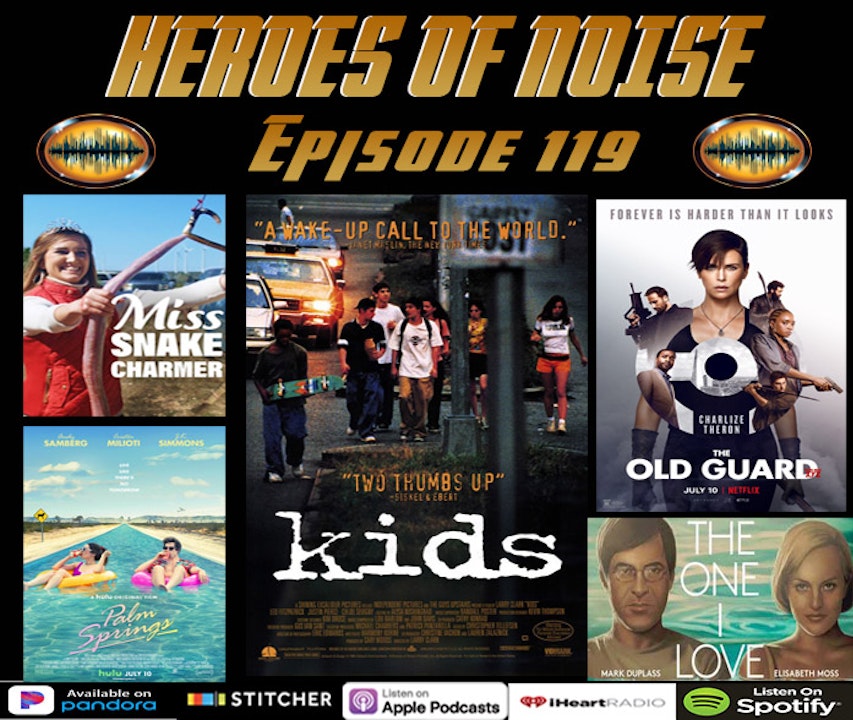 With Joe Stark and Leftover Brian

Welcome to the first of 2 episodes that you'll be getting this week. On Episode 119 Steve is out and I sit down with returning guests Joe Stark from Starkcast and Leftover Brian from Pop Culture Leftovers.  This was actually going to be a bonus episode as we were only planning to talk about one particular movie but we ended up talking about 5. Before we get to the main event, Brian and I briefly talk about the documentary "Miss Snake Charmer" (Now on Amazon Prime Video), All 3 of us have seen "The Old Guard" starring Charlize Theron (Now on Netflix), Brian and I also talk about "Palm Springs" (Now on Hulu), as well as the 2014 movie that came from out of nowhere called "The One I Love" (also on Netflix and starring Elisabeth Moss and Mark Duplass).

Now I want to take a moment to personally thank Brian and Joe for  doing me a solid and entertaining my sick idea to review Harmony Korine's 1995 breakout film "Kids". If you're not familiar with the premise of "Kids" here it is:

Kids is a 1995 American coming-of-age drama exploitation film directed by Larry Clark and written by Harmony Korine. It stars Leo Fitzpatrick, Justin Pierce, Chloë Sevigny, and Rosario Dawson, all in their film debuts. Primarily set during the course of one day, Fitzpatrick, Pierce, Sevigny, Dawson, and other newcomers portray a group of teenagers in New York City with hedonistic behavior toward sex and drugs during the mid-1990s.

"Kids" is a very graphic movie that deals with some uncomfortable subjects and we definitely get into that. This is also a spoiler filled review so if you haven't seen it and plan to, you might want to consider coming back to this one after viewing.

Lastly I want to publicly apologize to Rod Claerbout, cohost of Number One Comic Books, for being an absolute shit head and referring to him as "Dustin". I literally have no idea why I spaced out on your name and again, I apologize. Trust me that Brian and Joe let me have it when I said that.

(This wasn't my best hosting job. I admit it)

Brian, Joe, and Rebekah Dahling  also host Number One Comic Books and I highly recommended that you listen to their podcast. Its super entertaining and informative.

One might say it's edutainment, but they'd probably get ridiculed by Brian.

I'm only half kidding when I say that.

I'll stop with the rambling and let you get to it. We'll be back later this week with Episode 120.

Be sure to vote for Pop Culture Leftovers in the People’s Choice and TV & Film Categories at podcastawards.com.

Listen to our other podcast

The Word: The Unofficial PREACHER Podcast